In July 2015, William Merideth was cited for criminal mischief and wanton endangerment after shooting down a drone hovering in his “backyard.”  Merideth told police that he shot the drone because he did not know if the drone was operated by “a predator looking at my children.” Bullitt County Judge Rebecca Ward cleared Mr. Merideth of first-degree endangerment and criminal mischief charges, ruling: “I think it’s credible testimony that his drone was hovering from anywhere, for two or three times over these people’s property, that it was an invasion of their privacy and that they had the right to shoot this drone,” Judge Ward told the court.  Three witnesses allegedly testified that they saw the drone hovering below tree line.

The drone owner, David Boggs, on the other hand, said he flew his drone more than 200 feet above the property and didn’t hover it in Meredith’s backyard.

Boggs was incredulous at the ruling:

The law on this issue is very murky.  The Federal Aviation Administration (“FAA”) says drones can’t fly “near people”, but its guidelines don’t specify a distance.  In United States v. Causby, the U.S. Supreme Court held that a landowner’s property rights do not extend indefinitely up “to the sky,” but that a landowner does hold exclusionary property rights in at least some of the low-altitude “non-navigable” airspace directly their parcels.  The standard is that a “a property owner owns only as much air space above his property as he can practically use. And to constitute an actionable trespass, an intrusion has to be such as to subtract from the owner’s use of the property.”  This standard for airspace trespass has been adopted by the Restatement (Second) of Torts.

This issue is not going away and the issue of what rights a landowner has in the airspace between the ground and the “navigable airspace” controlled by the FAA remains an unresolved issue. 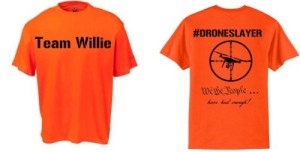